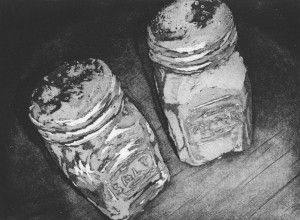 SIPS selects work created by young printmaking artists from around the world to include in the student exhibition. TMC adjunct instructor Kate Rowekamp ’12, presented information about the show to her printmaking class and specifically sought out Nicole and Michea with recommendations on specific pieces to enter. Nicole explains, “I think in regards to the aquatints we definitely felt they were our strongest pieces thus far. For me, I love that “21 Million in the U.S.” got in because it was created with the idea that the working horse’s impact in our lives was and still is often overlooked.” 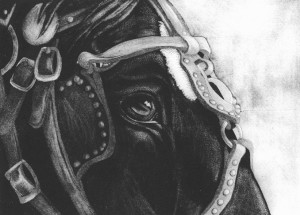 Both students had two pieces of art accepted into the show. Reaction in the Art Department to news of their acceptance was enthusiastic. “Our professors were so excited, but not as excited and happy as we were. … I could not have done it without Kate’s (Prof. Rowekamp) motivation and amazing teaching. To have art work go across the world is a big honor and something I’ll never forget,” said Michea. Her accepted works included “Shakers,” a striking etching and aquatint, and “Manly Squid Wearing a Poncho in the Shower,” a woodblock print. Nicole’s submissions included “21 Million in the U.S.,” a beautiful etching and aquatint detailing a carriage horse in bridle gear and “776 B.C.” a detailed etching depicting the first Olympics with a chariot race. Assistant Professor of Studio Art Elizabeth A. Neal expressed her pride in these students’ accomplishment, saying “Thomas More College in Egypt! This is exciting!”

Nicole said of the experience, “We got notice our work was accepted late because of an e-mail error, and communication with those in charge was difficult, so we shipped our pieces over and hoped they made it in time for the opening. We didn’t know for sure until they updated the website with the photos. I was super thrilled when I checked and found our pieces with the featured artworks. … I was pretty ecstatic and it still excites me to think that halfway around the world something I created was being viewed and hopefully enjoyed.” Dr. Wael A. Sabour, Curator of SIPS said of all the young artists on display, “The majority of the exhibited artworks from around the world demonstrate the ability of the young artists to express their feelings and visions eloquently as well as the ability to investigate and analyze difficult and complex subjects.”  For more about SIPS 2016, visit studentsprintshow.com. To find out more about art degrees available at Thomas More College, visit thomasmore.edu/art. Congratulations again to Michea and Nicole on their excellent showing in SIPS 2016.

“Shakers” by Michea Supinger can be seen second from the left; third from the right is “21 Million in the U.S.” by Nicole Kallmeyer.