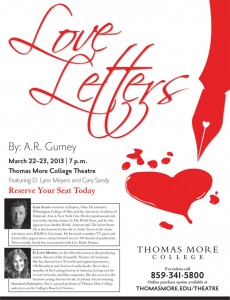 Sandy is best known for his role as Andy Travis in the classic television series WKRP in Cincinnati. He has made countless TV guest and feature film appearances, and performed in over 100 theatrical productions. Of late, he has focused his talent on award-winning radio drama. Meyers is a graduate of Thomas More College and is in her 15th season as artistic director of Ensemble Theatre of Cincinnati. She has directed over 50 world and regional premieres, Off-Broadway and dozens of audio books. She has cast for several networks and film companies and served as the location casting director for the Academy Award-winning Shawshank Redemption.

Send in Copies of Your Love Letters to Be Included in the Set!
Fresh off of Valentine’s Day, Thomas More College invites the public to send in copies of their treasured love letters to be included in the set of Love Letters.  The letters will be strung as a curtain backdrop during the weekend of March 22-23. Additionally, the letters will be incorporated into a visual display so attendees can read them. Send in your love letter by email to alana.ghent@thomasmore.edu or by mail: Thomas More Theatre Dept./LOVE LETTERS, 333 Thomas More Parkway, Crestview Hills, Ky., 41017 by March 15. (Submissions cannot be returned.)