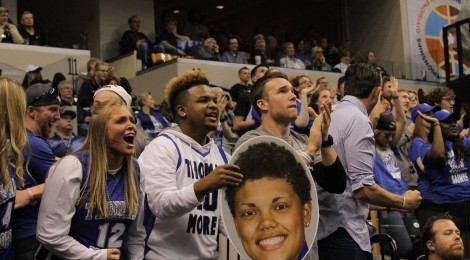 Some of my favorite movies are sports’ stories: Remember the Titans, Rudy, A League of Their Own, Hoosiers, The Blind Side – so many ways to portray fighting the good fight and coming up a winner. One of my absolute favorite sports stories is better than any two hours of Hollywood magic; it’s the story of the TMC Saints women’s basketball team and their march to a repeat in the national championship.

These young women are able to maintain the challenging curriculum of TMC academics and compete effectively in their conference and the country in a game that they love. These women keep a winning attitude and make the game fun for their fans. It’s easy to see that they have a great time playing together, whenever they take the court the mojo is like magic!

As one of their fans, there was no way I could not go to the championship game when it was located so close to home. I was not alone; the Saints faithful, made up of students, family, friends, alumni, faculty and staff, and those who support the College in all manner of ways, made the trek to Indianapolis by bus and car, to cheer on this incredible team.

What a great atmosphere, as Indy played host (all on the same weekend) to the DIII, DII, and DI teams who made it to the finals. I took my husband along as he loves sports in general and basketball in particular and is a great play-by-play man having been a part of the game since he was old enough to hold a ball. We arrived with several TMC staff members; it didn’t take long to see that the Saints, by far, had the greater number of fans and the high fives ran rampant as we walked through Bankers Life Fieldhouse to find some great seats.

We entered the lower arena as the DII game was just wrapping up with the undefeated Lubbock Christian Lady Chaps edging out Alaska-Anchorage in a 78-73 dogfight. We located seats at midcourt just seven back from press row and settled in amongst an almost entirely Saints section. My husband immediately made friends with two University of Connecticut fans seated behind us. They were in town for the DI game and had come to watch Tufts (our opponent) head coach, Carla Berube, who was a 1997 UConn graduate and member of their first NCAA championship team. There was no animosity and they soon saw their way to appreciating the Saints!

The first quarter started slow with Tufts using up every bit of shot clock they could with each possession. They were in the lead 9-5 with 4:26 to go in the quarter. This was not the Saints’ style of play, they like to swarm on the defensive end and run on the offensive. At the end of the first quarter, TMC was down by six – then it happened, at the 4:26 mark in the second quarter, Sydney Moss made an off-balance three pointer and was fouled on the shot. The momentum shifted, you could FEEL the change in the game as the Saints started to speed up and Tufts started making mistakes. A steal by Abby Owings, an inside basket by Nikki Kiernan with a foul to create a three-point play put the Saints in the lead. The rest of the first half was all Saints with TMC in the lead 32-26 at the break.

So much excitement in the air! The student section was abuzz, the band played the fight song, the cheerleaders worked the crowd – fans were getting what they came for, my husband calls it a good old-fashioned “slobber knocker.” These two teams had come to play and neither was going to back down!

The Saints started the second half with the ball and continued to swarm on the defensive end, creating turnovers and owning the boards. Tufts ran into foul trouble and two starters ended up on the bench mid-way through the third quarter giving TMC some breathing room, but not for long. Tufts women are an excellent team, playing tough and contesting every possession. They made their run halfway through the fourth quarter and with 6:28 to go, the game was tied at 49.

Talk about tense! It felt like the game was slipping away, what kind of horrible ending would that be to this story? Not the one for our Saints as they rallied and ran and swarmed and took the lead again and never looked back. They were just too much for the Tufts Jumbos, wearing them down as had been done to so many other opponents. What a great game! Certainly one for the ages as the national trophy comes back to this small college in Crestview Hills, Ky., where students play with the heart, courage, and attitude of winners.

“It was awesome to see my peers accomplish something so big and inspire others to strive to be great,” said Becca Juenger, junior communication major at Thomas More College. The Thomas More Saints (those not on the basketball team) traveled to Indianapolis on Monday, April 4, in support of their fellow classmates in the NCAA Championship game. Some took the bus that Resident Life was offering, others drove up separately.

Walking into the Bankers Life Fieldhouse, I could feel the energy of the crowd anticipating the game that was about to start. Most of the students sat in one area, and over half of the stands were full of screaming fans in royal blue shirts. There was a jumbo screen in the center of the ceiling that kept all of us on our toes whenever the coaches called a time out. What an amazing experience it was to sit side by side with all of my friends and classmates cheering on our favorite women’s basketball team!

It was a close game, each team scored one basket after another until the very end when the Saints took the lead and brought home the win!

After the game, the students who came on the bus went back home, but the students, like myself, who drove up separately, went out to celebrate. We walked to the downtown Indianapolis Westin hotel to surprise the team and congratulate them, and then we started our drive home, but not before stopping for ice cream. It was an amazing opportunity that I will forever remember, not only because of the win, but because I got to experience it with the ones that I loved.

← TMC Student Research Forum
A sports career for the ages →