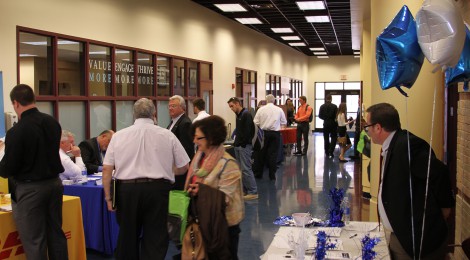 The 2015 TMC Career and Internship Fair welcomed over 40 different employers.

Through the support of faculty, staff, alumni, and community partners, Thomas More College’s 2015 Career and Internship Fair was a huge success! Breaking attendance records from years’ past, over 40 employers attended this year’s fair, where they had a chance to meet with over 120 Thomas More College students and alumni.

Adding to the excitement of the day, The Institute for Career Development and Graduate School Planning hosted the inaugural Interview Competition. The Interview Competition consisted of 21 students who competed in a mock interview setting. Community partners and alumni of Thomas More College participated as judges. Their time commitment was instrumental in assisting with the professional development of the student participants who honed their interview skills and received valuable feedback. 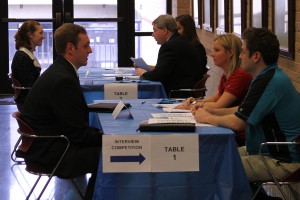 An Interview Competition was incorporated into the event with prizes for the top interviewing students.

The top-four interviewers in the competition earned cash prizes, graciously donated by an anonymous TMC alumnus and supporter of the College. The $1000 top prize was awarded to Michael Stephens, a senior biology major. Second prize of $500 was awarded to Robert (Andy) Bramer, a senior biology and philosophy major. Courtney Neltner, a sophomore English, history, and international studies major, and Cody Hinkel, a senior communications major, both tied for third prize, earning $125 each. Gift cards were awarded for two honorary mentions, compliments of TQL and the Thomas More College Success Center, to KatrinaHlebiczki, a junior middle and secondary education and mathematics major,andAlex Valentine, a senior communications major.

← The Remarkable Sisters of St. Benedict
On the Edge of Technology →