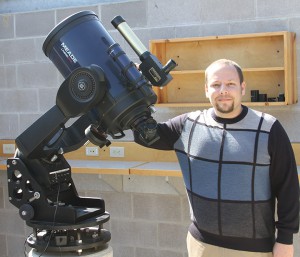 Q. How long have you worked at TMC?

A. I started at Thomas More College in the fall of 2008, fresh out of graduate school.

Q. Where did you obtain your degree?

A. I graduated from Conner High School in Hebron, Ky., and went to Western Kentucky University in Bowling Green, as an undergraduate, double majoring in physics and mathematics. I received a master’s degree in physics and a Ph.D. in astronomy from Georgia State University in downtown Atlanta. While I didn’t adapt well to life in a large city, I did enjoy numerous trips to Flagstaff, Ariz., for observing and one trip to Cerro Tololo, Chile.

Q. Where was your last vacation and why did you choose that destination?

A. Most of the time, the answer to this question will be Sanibel Island, Fla. My family has been going to the island every year for 28 years. In many ways, Sanibel feels more like a second home, instead of a vacation.

Q. Who is your role model and why?

A. The biggest inspiration for both my life and my career came from a middle school math and science teacher. Under his guidance, I really came to know myself and gain a self-confidence I never had before that time. The main reason I wanted to become a teacher is that I hoped I could have the same positive influence on my students’ lives, not just academically, but in an all-encompassing, life-changing manner. I have stayed in communication with this teacher through letters and email in high school, college, graduate school, and beyond. He was even the best man in my wedding!

Q. Why is astronomy important to learn?

A. With any science, I believe it is important for individuals to learn how to explore and explain the world around them. However, I believe astronomy has some advantages in appeal over some of the other sciences. Astronomy is a great subject for teaching people humility in the face of the immense size and grandeur of the cosmos. It’s also a field that is, in many ways, tied to the hopes and possibilities of the future of the human race. Who hasn’t dreamed of a future when we’ve spread throughout the Solar System and maybe even traveled the stars?

Q. What do you love the most about offering observatory events?

A. I am both proud and grateful that the crowd has grown over my years at Thomas More College. Many of the attendees to recent open houses were also in attendance during my first talks many years ago. I guess if they are coming back, I’m doing something right.

It also makes me happy to know that there are so many people in the community that have an interest and curiosity in these topics. Nationally, it sometimes seems as if science is getting a bad reputation. Locally, at least, we have a healthy group of individuals who appreciate the value of learning just a little bit more in their free time.

Q. What has teaching at TMC taught you?

A. My wife will be the first to tell you that I am not a patient person. In traffic or waiting in line, I have a tendency to get a bit anxious and angry. However, I’ve noticed that as an instructor, I appear to have an endless supply of patience. A lot of characteristics are important for anyone wanting to be a teacher, but I think patience is definitely one of the most valuable.

Q. What is an interesting fact about astronomy that many don’t know?

A. Today, professional astronomers could easily go through their entire careers without ever putting their eye to a telescope. Modern cameras and technology make it so that a typical observing run has the astronomer staring at multiple computer screens and spending little time at the telescope itself. This fact helps astronomers stay warm in the winters and cool in the summers, but also creates a bit of a disconnect between the observer and the sky, it’s even becoming common for astronomers to not even travel to an observatory in order to collect their data. Telescope facilities are automated such that you can simply put in a request and have the data shipped to the computer in your office. It’s a big step forward for efficiency, but also removes a bit of the romanticism associated with being at the telescope.

Q. What do you do when you are not teaching at TMC?

A. Three years ago, this question may have been difficult to answer. However, with the birth of my son, Eli, the answer is easy—I like spending time with him. In the summer, we spend a lot of time at his grandparents, walking in the woods and swimming in the pool. In the winter, we’ve been able to have some lengthy visits to Cincinnati Museum Center at Union Terminal.

Q. What song or artist do you listen to when you need to get motivated?

A. My favorite artist is The Dave Matthews Band. Love for the band was one of the things my wife and I had in common when we first met at Western Kentucky University. We still try to go to one of their concerts in the summer.

Q. What book is on your nightstand?

A. Next book on my list is The Martian by Andy Weir. Both my sister and my father read it and recommended it for its scientific accuracy. I’ve also been working on a copy of The Best American Science and Nature Writing from 2009. (Yes, I’m a bit out of date.)

Q. As a child, what did you want to be when you grew up?

A. I had many interests when I was young. Very early, I liked space and dinosaurs with equal excitement. In high school, I enjoyed writing as much as I enjoyed science. I still miss creative writing and wish I did more of it. Overall, I never spent too much time worrying about a career.

Dr. Ryle leads a series of lectures and night sky viewings at The Bank of Kentucky Observatory during the academic year. The 2015-16 schedule will be announced soon at thomasmore.edu/observatory.

Are you on social media? Spread the word by liking The Bank of Kentucky Observatory on Facebook.