For questions or to submit a story idea, contact Rebecca Stratton at 859-344-3309.
Browse: Home   /   TMC student calls March for Life a “joyful act of courage” 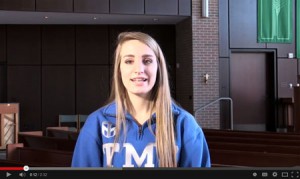 On this 42nd anniversary of the Roe v. Wade court decision that legalized abortion, pro-life supporters from across the country gathered for the March for Life. This year, they were joined by 13 students from Thomas More College, all members of the new Saints for Life club on campus which sponsored the trip. Four freshmen, seven sophomores, and two juniors set out for Washington, D.C., on Wednesday night by van. Most travelers left that evening to arrive early the next morning. Though the van was cramped and caused sleep deprivation, it was nice being together on the way to the March for Life. We prayed together and also listened to a pro-life talk by Abby Johnson, a well-known Catholic speaker and pro-life activist. In the morning, before the March for Life, we attended the Diocesan rosary and Mass with Bishop Roger J. Foys, D.D., and other students and parishioners at St. Dominic’s Church in Washington, D.C.

I have attended the March for Life in the past, along with about half of the other TMC participants, but it was a new experience for some. I think most of those who attended previously agreed that it was the best March for Life so far. We didn’t have to battle rain or frigid temperatures and there were so many wonderful people there willing to fight for the innocent children lost to abortion. There were scores of fellow college students from universities across the United States, as well as an abundance of high school students and adults who all agree that human life is precious, from conception to natural death. Our Saints for Life club co-leader, Katie Bischoff, commented, “It was so empowering to be surrounded by so many like-minded youth who are the future of the Church; it gives me great hope that my generation will be the one that will abolish abortion.”

During the march to the United States Supreme Court Building, we encountered some women holding signs that read, “My father was a rapist.” This powerful act of courage proves that there are no excuses for allowing abortion, not even in the cases of rape or other circumstances. We also encountered a representation from the Canadian embassy who united with our demonstrators in standing up to an unjust law.

It was a fantastic, moving experience and we will definitely return next year. Our hope, at minimum, is to double our 2015 numbers. We would love to gather a huge group of pro-life students from Thomas More College to attend and share in this joyful act of courage which allows us to speak out for those who cannot.